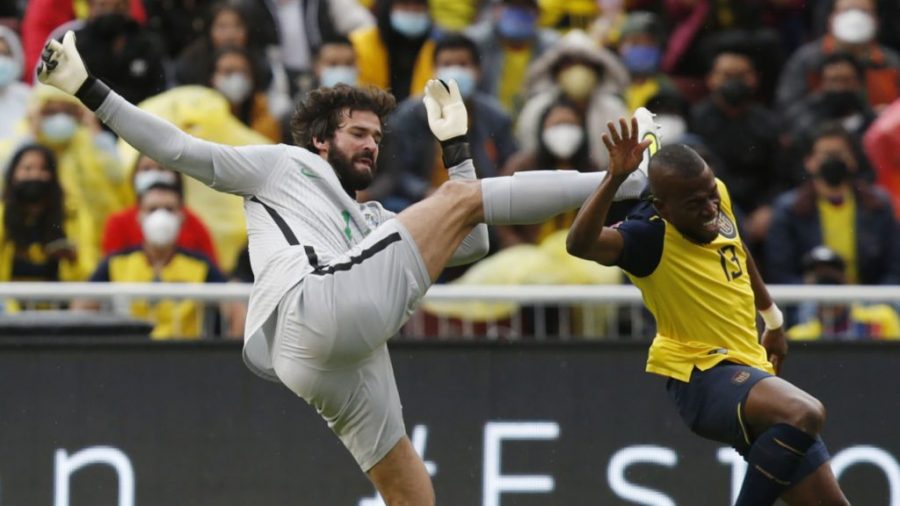 Liverpool goalkeeper Alisson was sent off twice in the same game as Brazil faced Ecuador in a World Cup qualifier overnight, although he still managed to stay on the pitch both times.

Brazil have already qualified for the World Cup in Qatar later this year and the game in Quito finished 1-1, also edging Ecuador closer to an automatic place at what would be only their fourth ever finals.

But the scoreline didn’t tell anything like the full extent of the drama that unfolded.

Emerson Royal was shown a yellow card in the first minute and Casemiro put Brazil ahead in the sixth. Ecuador goalkeeper Alexander Dominguez was given a straight red card only 15 minutes into the contest, before Emerson followed shortly afterwards upon picking up a second yellow.

Alisson’s first red card came at the half hour stage when the referee ordered him from the pitch after catching former West Ham and Everton striker Enner Valencia in the head with a high boot. However, a VAR intervention resulted in it being downgraded to a yellow card due to the fact he had won and cleared the ball a fraction of a second before making contact with his opponent.

Ecuador eventually equalised with 15 minutes to go through defender Felix Torres. The hosts then thought they would have the chance to win it when the referee pointed to the penalty spot in stoppage time. This time, Alisson was adjudged to have wiped out Ayrton Preciado while attempting to punch clear a bouncing high ball, and was shown a second yellow and sent off…again.

But, for a second time in the match, VAR came to the Liverpool goalkeeper’s rescue. On review, it was decided that it was not a foul as he made contact with the ball narrowly before following through onto the player. The penalty was overturned and the second yellow rescinded.

Brazil will play their next match of this World Cup qualifying session on Tuesday night local time (12:30am on Wednesday in the UK) when they host Paraguay.